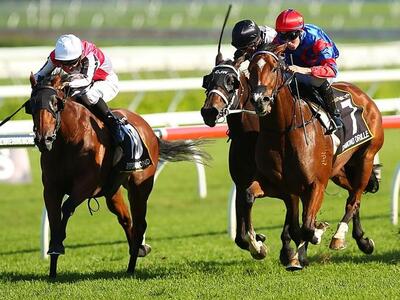 "Diamond Drille had beaten Royal Descent and Gai was setting her for the Oaks,'' Kolivos said.

"We were really excited about her going into the autumn carnival last year and then she suffered a tendon injury and needed 12 months back.

"To see her return and win today is a great thrill.''

Diamond Drille had beaten Royal Descent by almost two lengths in a Canterbury 1500m race but two starts later, after another win at Canterbury, she broke down. Royal Descent trained on to win the ATC Australian Oaks by 10 lengths.

But Waterhouse and Kolivos were not lamenting what might have been as Diamond Drille finished powerfully to score an impressive win in the Group 3 $150,000 Aspiration Quality (1600m) at Royal Randwick yesterday.

"It's so good to have her back,'' Waterhouse said. "She is such a talented mare and I can't tell you how much improvement there is in her.''

Diamond Drille ($8) came from well back on the turn to overwhelm her rivals and score by a short neck from Mahara ($7.50) with Danesiri ($31) three-quarters of a length away third.

Jockey Tim Clark admitted Diamond Drille was "not in a great spot" when held up behind runners coming into the straight.

Jockey Tim Clark admitted Diamond Drille was "not in a great spot" when held up behind runners coming into the straight but his patience paid off eventually. Picture: Simon Bullard Source: DailyTelegraph

"It was an awfully run race,'' Clark said. "It was stop-start and horses were getting checked everywhere.

"I held my breath and was patient then once she got to the outside she was really good late to get up and win.''

Waterhouse gambled by deciding to back up with Diamond Drille seven days after the mare ran only eighth in the Wiggle Stakes at Warwick Farm.

"She was on the worst part of the track at Warwick Farm then when I looked at her on Sunday, I was surprised how well she had come through that run,'' Waterhouse said.

"Then it was like a bolt of lightning when I decided to run her again today I rang Greg Kolivos on Sunday and told him what I was thinking and he just said if I was happy enough with the mare, then run her and it has worked out well.''

Waterhouse said she may consider starting Diamond Drille in the Epona Stakes and Emancipation Stakes during the autumn carnival.