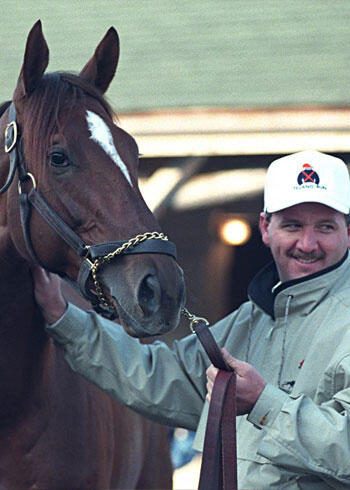 On a weekend when the sports world will surrender 150 precious seconds of its attention span to find out if California Chrome can do what 12 Thoroughbreds dating to Spectacular Bid in 1979 could not, Kenny McPeek answered a question with a question.

"You ever take Lasix?" McPeek said Friday from Kentucky.

"Well, I took it years ago and lost 18 pounds," said McPeek, a respected trainer in thoroughbred racing. "That's right 18 pounds, water weight. It flushes so much fluid out of you that it takes time to replenish those fluids."

McPeek calls California Chrome, the horse looking to become the first Triple Crown champion since Affirmed in 1978, the class of the 146th Belmont Stakes field. If the beautiful chestnut with four white stockings and a striking white blaze down his nose is to be defeated over 1.5 grueling miles, McPeek also said chances are good it won't be by Wicked Strong, Tonalist or Ride on Curlin. He thinks it could be Lasix.

Lasix, a dieretic designed to control bleeding during races, has been available to race horses during the past 36 years and none have won the Triple Crown. New York became one of the last states to legalize its use in 1995. Since then, eight horses have won the Kentucky Derby and Preakness, and I have $2 Belmont tickets to win on Silver Charm, Real Quiet, Charismatic, War Emblem, Funny Cide, Smarty Jones, Big Brown and I'll Have Another that are worthless today.

Unbeaten in six races this year and looking fine and fit, California Chrome, at 3-5 odds, gives us every indication we are to witness history Saturday. He is training well. He hasn't lost weight. He is a special horse. Then again, consult the paragraph above and you have seen the term "special" used to describe all those horses after winning the first two jewels. None of them won the Belmont. From starting gate problems, to jockey error, to injury, to getting nipped at the wire, the heartache at Belmont has struck in almost every conceivable way.

McPeek, who trained Sarava to the 2002 Belmont dream-wrecking victory over War Emblem, sees one correlation.

"I think it will be difficult for California Chrome to beat the competition when running on Lasix for three consecutive races in a short period of time," McPeek said. "If you give a shot of Lasix in the first week of May, the third week in May and again in early June, and then all his traveling, I just think it takes enough steam, enough juice out of him that it is keeping the horse from being able to pull off the Triple."

Since 1995, Point Given and Afleet Alex have bounced back to win the Preakness and Belmont after not winning the Derby, and McPeek concedes that it is an argument against him. Yet he remains strong in his belief that Lasix, administered on race day, has been a major reason that history has been denied time after time — 12 times in all since Affirmed's Triple Crown. The body needs fluids for nourishment, McPeek insisted, and hydration is such a huge part of it.

"This is a personal opinion and not in alignment with a lot of trainers in the industry, but I believe we need to eliminate race-day medication, including Lasix, in all graded races," McPeek said. "Secretariat didn't need Lasix. Seattle Slew didn't need it. Affirmed didn't need it.