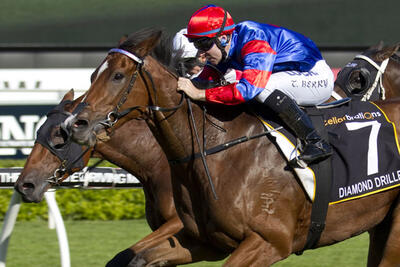 Riding with an angel and a blue ribbon pinned to the strap of his helmet, Tommy Berry dedicated his Queen Of The Turf Stakes win aboard Diamond Drille to his late brother Nathan.

With his twin's death from NORSE syndrome still raw, Tommy blew a kiss to the heavens after he crossed the finishing line in an upset result.

"Nathan never got to ride a Group One winner, that was it there buddy," Berry said.

"We did this one, you were right with me brother."

The mare was a sentimental favourite only with punters happy to send her around at $41.

She relaxed well in the run for Berry and finished strongly down the outside to get the better of grand mare Red Tracer and then Gypsy Diamond whom she beat by a short neck.

Berry's voice wavered as he spoke about the significance of the victory, especially with his family trackside.

"Dad's here today with Mum. He hasn't been to a Saturday meeting since we started so it's pretty special," Berry said.

"Gai doesn't put horses in Group Ones to just go around and pick up prize money. She puts them in there because she believes they're a winning chance and there might have been a bit of Nathan's help."

Waterhouse rarely has a Group One winner start at double-figure odds but said it was a fair assessment given the quality of the field.

"We discussed how everyone was wanting to be on the speed and you only had to see how they all went hammer and tong frantically in front," Waterhouse said.

"Tommy let her find her feet and attack the line and she did exactly that."

Catkins was heavily backed from $3.60 into $2.90 but turned in one of her worst performances to finish sixth, beaten three lengths.

Jockey Hugh Bowman knew he was in trouble a long way from home.

"She was below par - it was evident at the 600 (metres), she wasn't travelling into the race like she can," Bowman said.