FLAIR Strips as Effective as Lasix 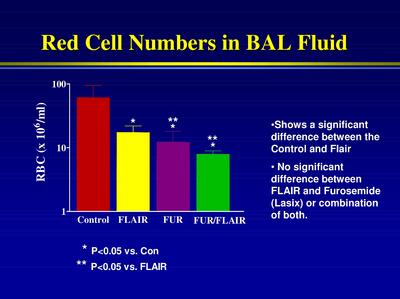 With the recent high profile disqualification in Australia resulting from lasix treatment within the withdrawal period it is timely to review work done at Kentucky Equine Research which showed a FLAIR strip & Lasix have the same effect on reducing EIPH ( Exercise Induced Pulmonary Haemorrhage). The graph above shows the result of the study in which 8 thoroughbreds were sprinted for 2 mins on a treadmill, their lungs were washed to count the red blood cells giving an indication of the incidence of bleeding.

The problem with using Lasix is you have to replenish various minerals as Lasix is a diuretic and reduces fluid in your horse with the potential to create a mineral deficiency.

No such problems with a FLAIR strip so as well as reducing the incidence of EIPH your horse also benefits from a 3-5% energy saving.

It is a no brainer-use a LAIR strip for performance, protection and prevention